There are several ways that soil pollution is problematic. For example, when plants grown in contaminated soils, they may absorb the toxins and die, or even worse, animals or people may eat them and become ill or poisoned. Animals and humans may also breathe in or touch pollutants and become sick.

It’s important to understand that contaminants don’t always originate from their final location. They are often dropped or spilled on the soils, or they migrate from another area. Based on the type of pollutant, there are some situations where the soil is treatable, and the contaminants can be removed.

Some of the most effective methods for removing soil pollution are listed here.

This is a process that introduces heat to raise the subsurface temperatures. The goal is to raise the temperatures enough to volatilize the chemical contaminants. When this happens, vapor extraction is possible.

Some of the technologies being used for this process include ET-DSPtm, electrical resistance heating (ERH), and ISTD. If you are planning a thermal remediation project, it’s a good idea to consult with the pros for tips on how to make it successful.

Plants are a huge help when it comes to the decontamination of soil. They help the micro-organisms in the soil degrade the pollutant by extracting or immobilizing it.

One example of this is soils that are polluted by a water-soluble material, such as copper, selenium, arsenic, nickel, or zinc. These materials are often extracted by plants, and then disposed of as hazardous waste or smelted.

Smelted plants are harvested and then burned, along with the extracted metals. This is usually done with an acidic solution.

It’s important to note, the remediation only goes as deep as the roots of the plant have a gown. As a result, pollutants may be left behind in the soil.

Digging Up the Polluted Soil

In some other situations, the polluted soils are excavated and then treated, replaced with clean soils, or disposed of. Excavation is often used when there’s buried debris or old, disposed of drums of chemicals on a site.

Treatments on site for these issues usually include a combination of thermal, electrical, biological, and chemical treatments. If the soil is taken off-site for treatment, the same methods are used, and then the soil is returned to its original “home.”

In some cases, polluted soils are treated by flooding the soil with a solution that moves the contaminants to a location where they are able to be removed. Water or, in some cases, water and other additives, are used.

When the problem is excessive salts, water alone may be effective. The additives are determined by the type of pollution present in the soil.

As you can see, there are several methods that can be used for the removal of soil pollution. If you have an area that is polluted, then the best thing you can do is reach out to the pros for assistance. They can help you determine what the best removal option is. 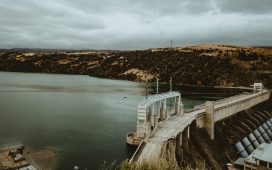